Using Switcher Studio as a Webcam

How to push Switcher Studio into Zoom, Meet, Teams, and more

Switcher as a Webcam is a feature that is powered by an integration with Camo, which makes it easy to push the Switcher Studio live view into third-party video conferencing tools like Zoom, Google Meet, Microsoft Teams, WebEx, and more.

Camo, an app created by the software company ReIncubate, makes it easy to use an iPhone or iPad as a webcam. The cameras on iOS devices are significantly better than webcams, so using Camo leads to higher quality video calls.

The Switcher Studio Camo integration uses Camo's technology to turn Switcher into a webcam, which means you can add Switcher Studio as an audio/video source for video call apps and browsers.

There is no additional cost for using the Camo integration with Switcher Studio, and you do not need to install the Camo iOS app. The Camo functionality exists inside of the Switcher Studio app.

Supported operating systems for Camo are MacOS and Windows 10.

Installing the Camo App on Your Computer

Follow the instructions below for the type of computer you will be using Switcher as a Webcam with.

Installing the Camo App on Your Mac

You should only have to install Camo on your Mac once. Before installing Camo, make sure you are running the latest versions of MacOS:

Note: Camo Studio will prompt you for several permissions to install. You must allow the permissions in order for the Camo/Switcher Studio integration to work correctly. Camo will move itself to the Applications folder and install a plugin to let video conferencing apps see it.

Once Camo has been installed, it will open on your Mac. When Camo Studio runs for the first time, it will ask if you want it to automatically check for updates. We recommend that you allow it to check for updates. You can close Camo if you are not using it immediately.

Installing the Camo App on Your PC

You should only have to install Camo on your Windows 10 PC once. Before installing Camo, make sure you are running the latest versions of Windows 10:

Note: Camo Studio will prompt you for several permissions to install. You must allow the permissions in order for the Camo/Switcher Studio integration to work correctly.

Once Camo has been installed, it will open on your PC. When Camo Studio runs for the first time, it will ask if you want it to automatically check for updates. We recommend that you allow it to check for updates. You can close Camo if you are not using it immediately.

Plug the iPhone/iPad into your computer

Currently, the Camo integration requires a wired connection from the iOS device's charge port to the Mac/PC. The cable you use will depend on the charge port on the iOS device (lightning or USB-C) and the available ports on the computer (USB-A or USB-C).

Note: Using a USB hub can cause video lag and connection issues. Switcher as a Webcam requires connecting the iOS device directly to a computer port.

Note: Switcher Studio will not show up in the device list in Camo until you are in the switching mode. 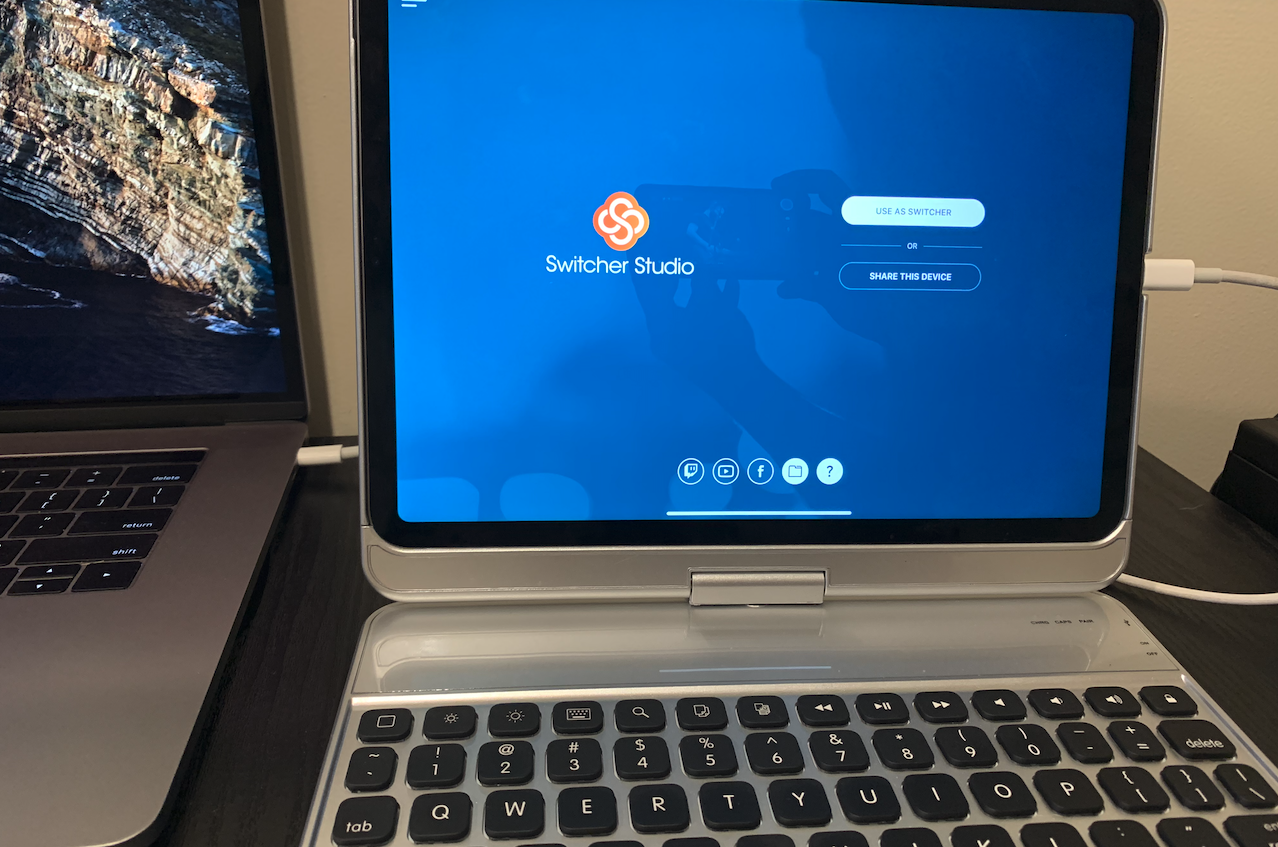 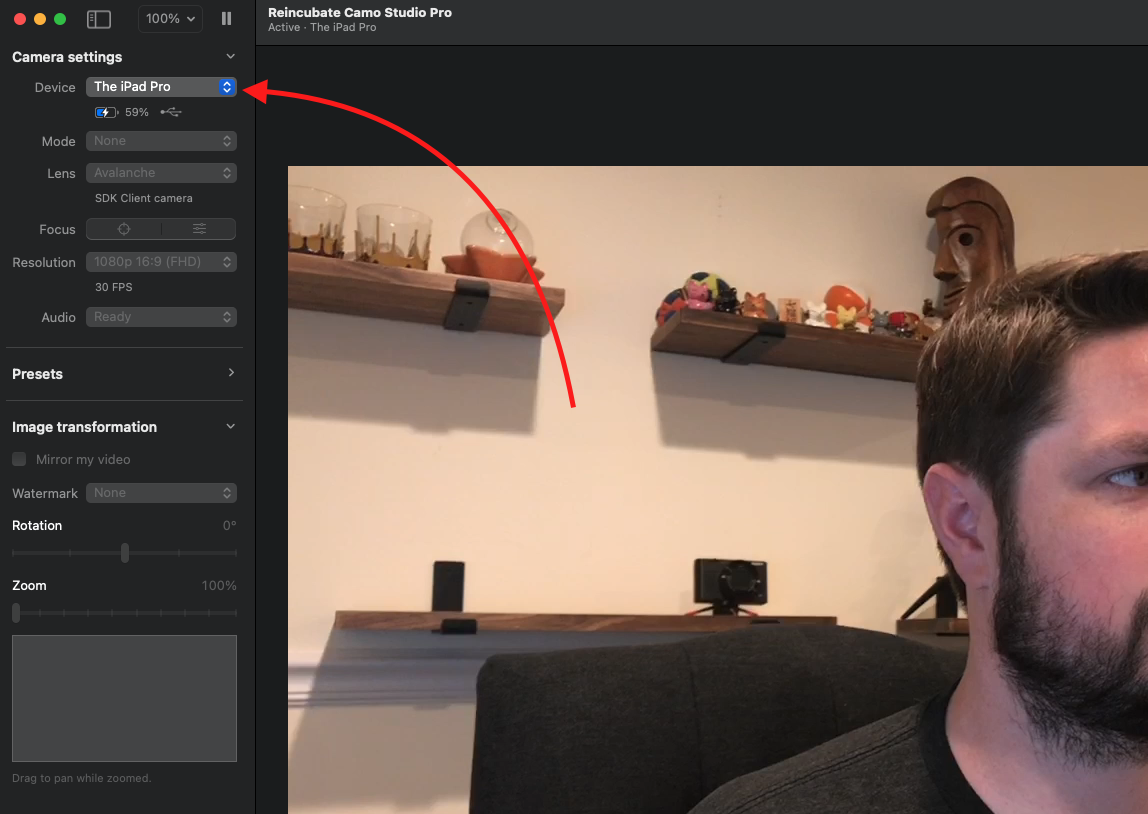 By default, the video preview in Camo will be zoomed in. To adjust it to match the live view in Switcher Studio:

Selecting the Audio Source in Camo

If you would like to use the connected iOS device's built-in microphone, ensure that Camo Microphone is the selected input. If you have a computer running MacOS, you can select a USB audio device or built-in microphone as an alternative audio source. 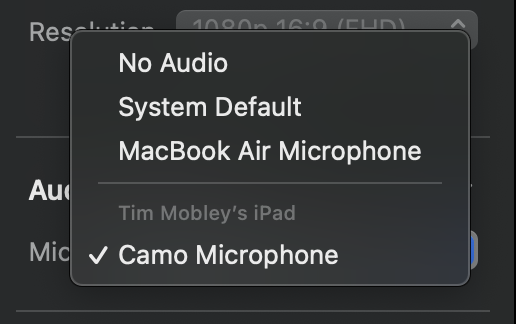 Using Switcher as a Webcam with Video Conferencing Tools

You can use Switcher as a Webcam with any third-party program or browser that is compatible with Camo. You can see the full list of compatible options on Camo's website here.

To use Switcher as a Webcam with a video conferencing app, you'll simply connect Switcher to Camo, open a third-party program that uses a webcam, such as Zoom, Google Meet, Microsoft Teams, WebEx, etc. From there, the exact steps will vary by program, but the overall process is the same:

Using Switcher Studio as a Webcam with Zoom 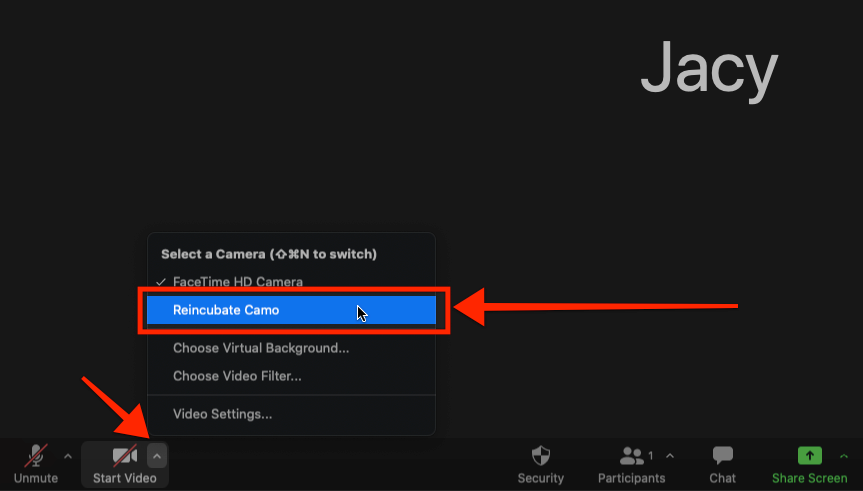 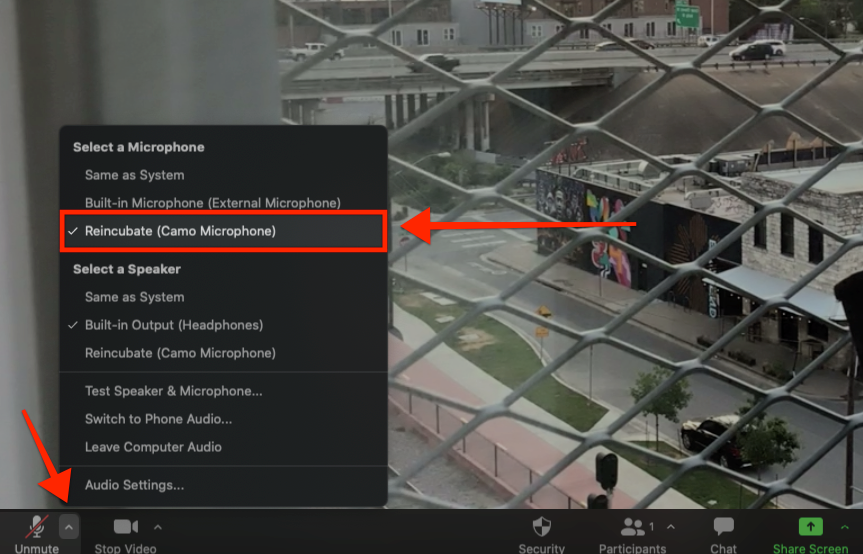 Selecting headphones as the speaker

We highly recommend wearing wired or Bluetooth headphones connected to your Mac. To set the headphones as the speaker: 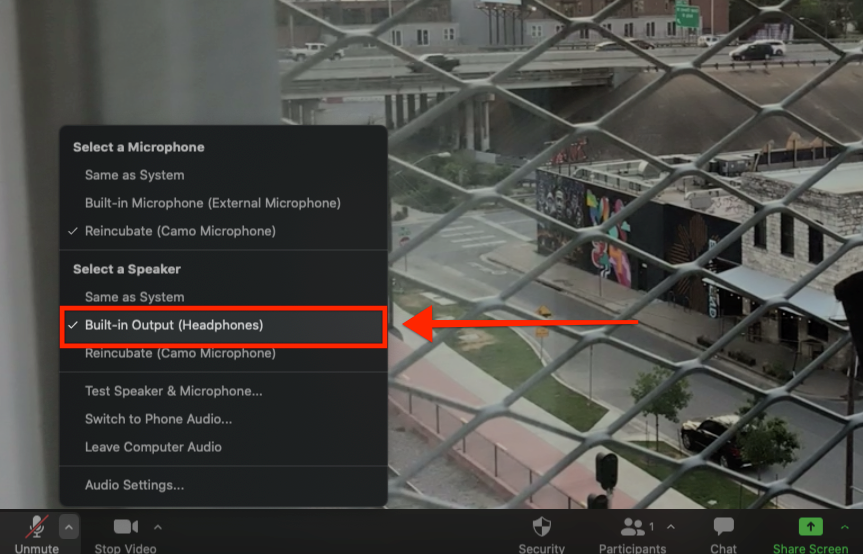 By default, Zoom mirrors the source video image. Mirroring the image will cause issues when using Switcher Studio, especially if you are using text or graphics in your production. We recommend disabling mirroring as follows: 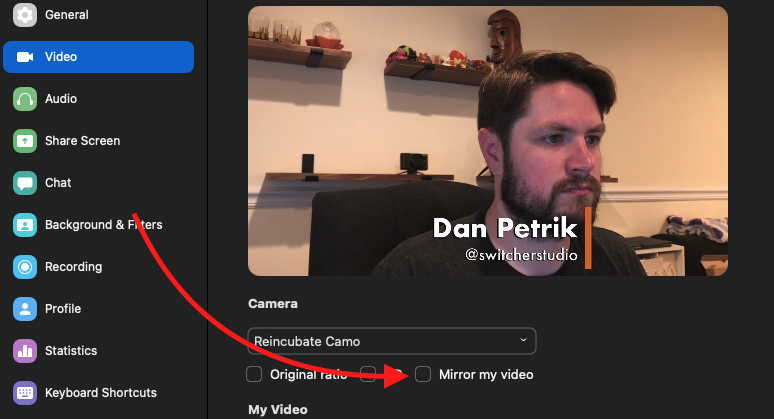 Note: Switcher as a Webcam is the easiest way to output Switcher to Zoom. However, if you are unable to use this option due to the requirements, an alternative way to get Switcher into Zoom is by using Airplay. For more information, please go to the Help Center article: Using Switcher Studio with Zoom Video Conferencing

Using Switcher Studio as a Webcam with Google Meet 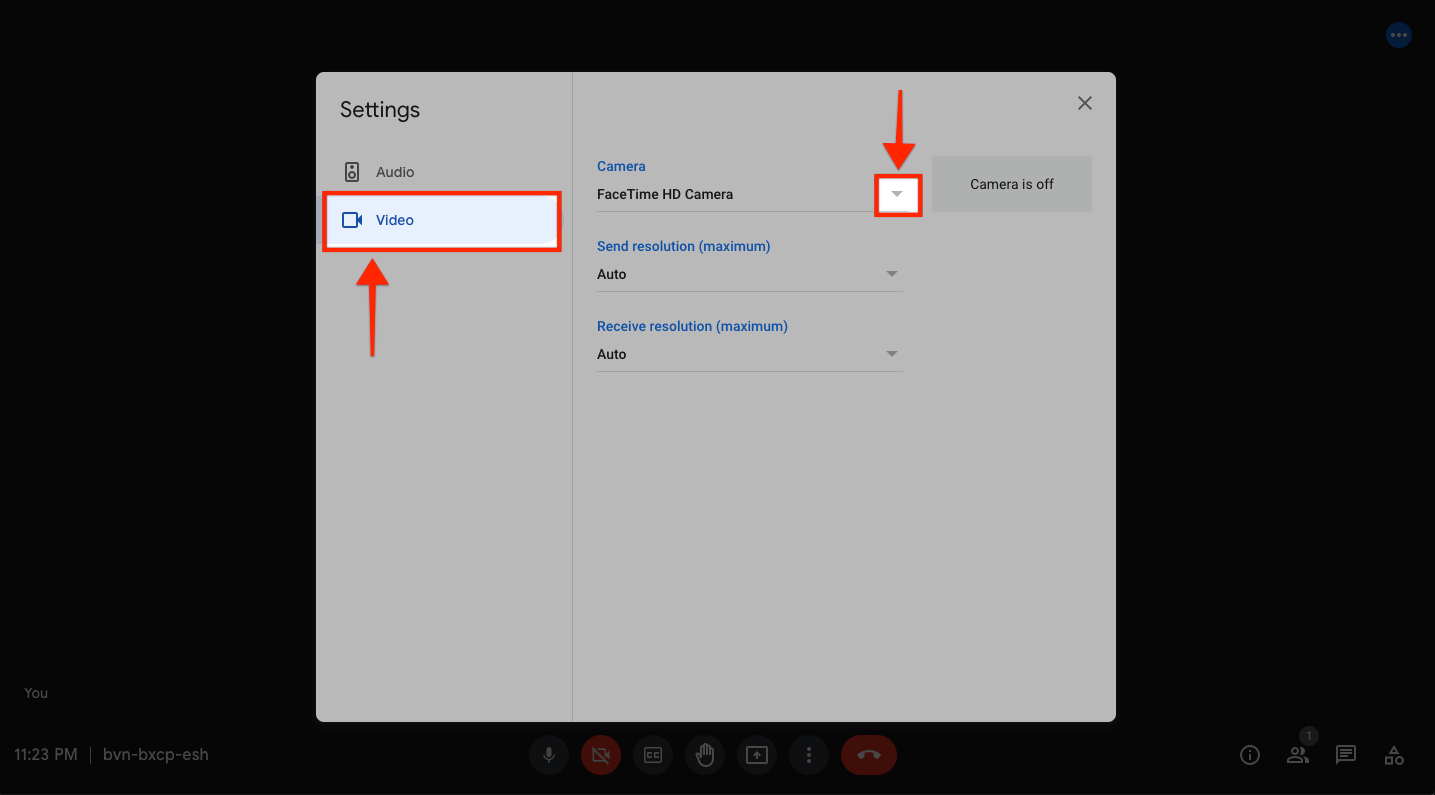 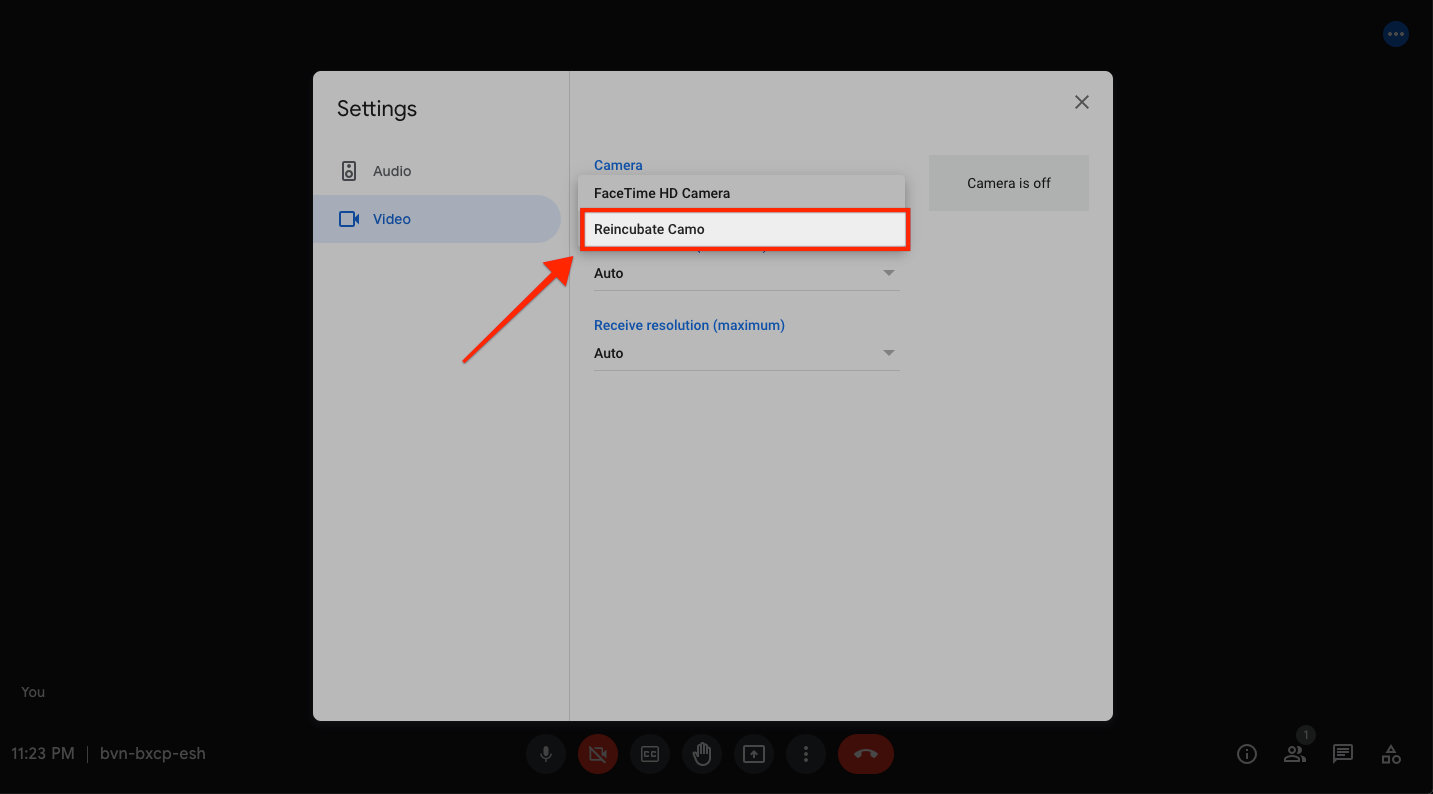 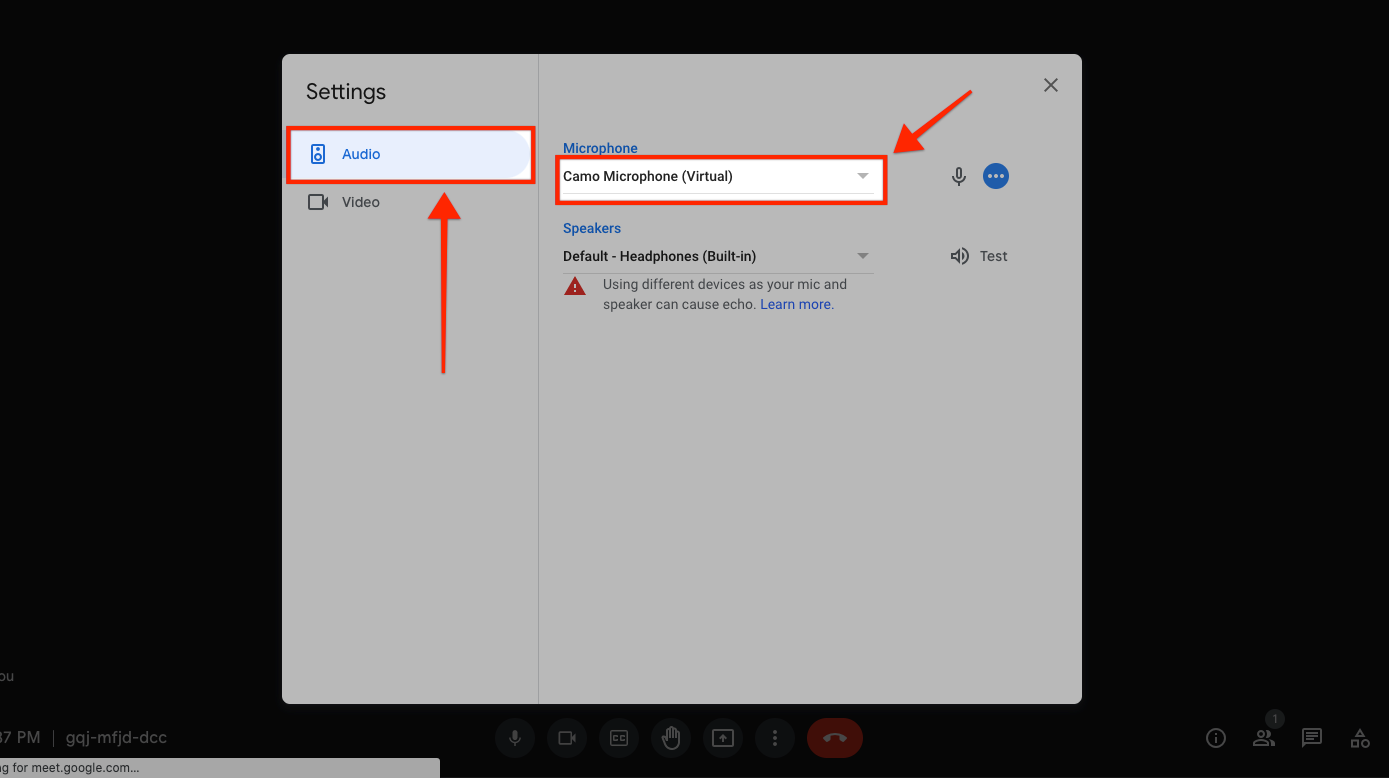 There are two primary ways to connect audio when using Switcher Studio with Camo. You can use the audio from the iPad or an audio source on the computer (MacOS only).

Audio from the iPad includes:

Note: It is not possible to use the charge port to connect an external audio mixer.

Audio from the computer includes:

Camo recommends matching the resolution output in Switcher Studio to the video conferencing service's capabilities. When using Switcher as a Webcam, you can set the resolution as follows: 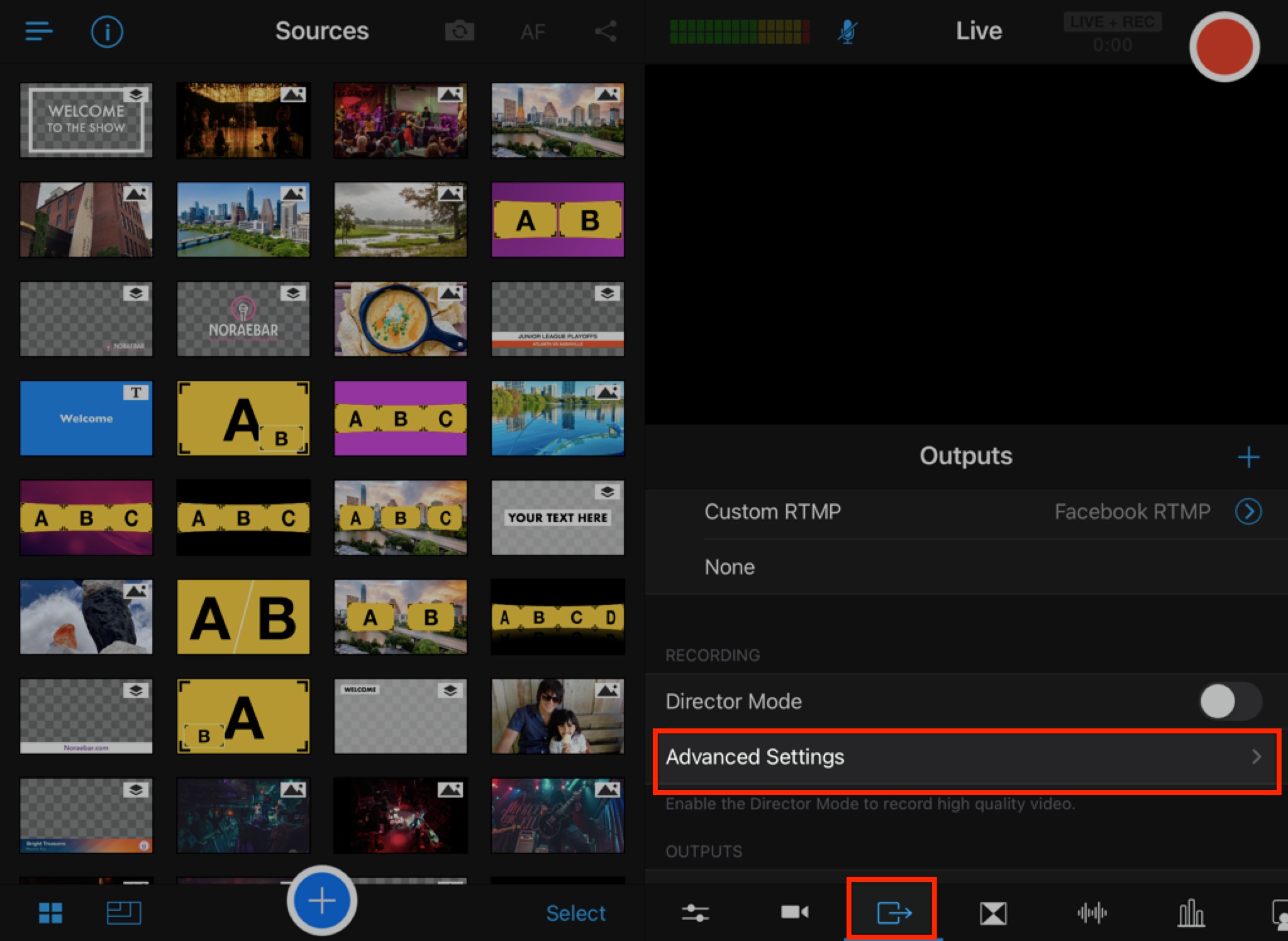 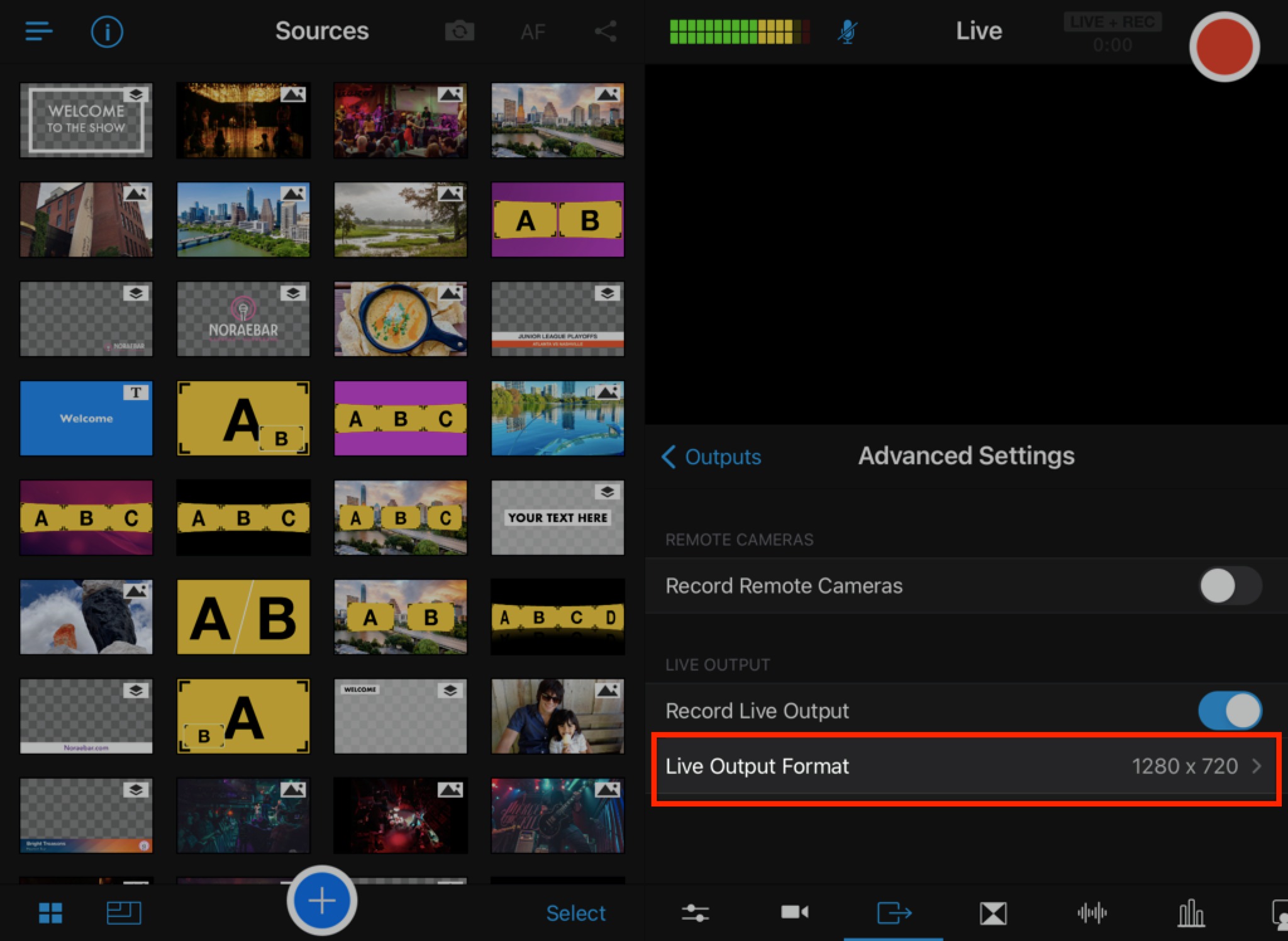 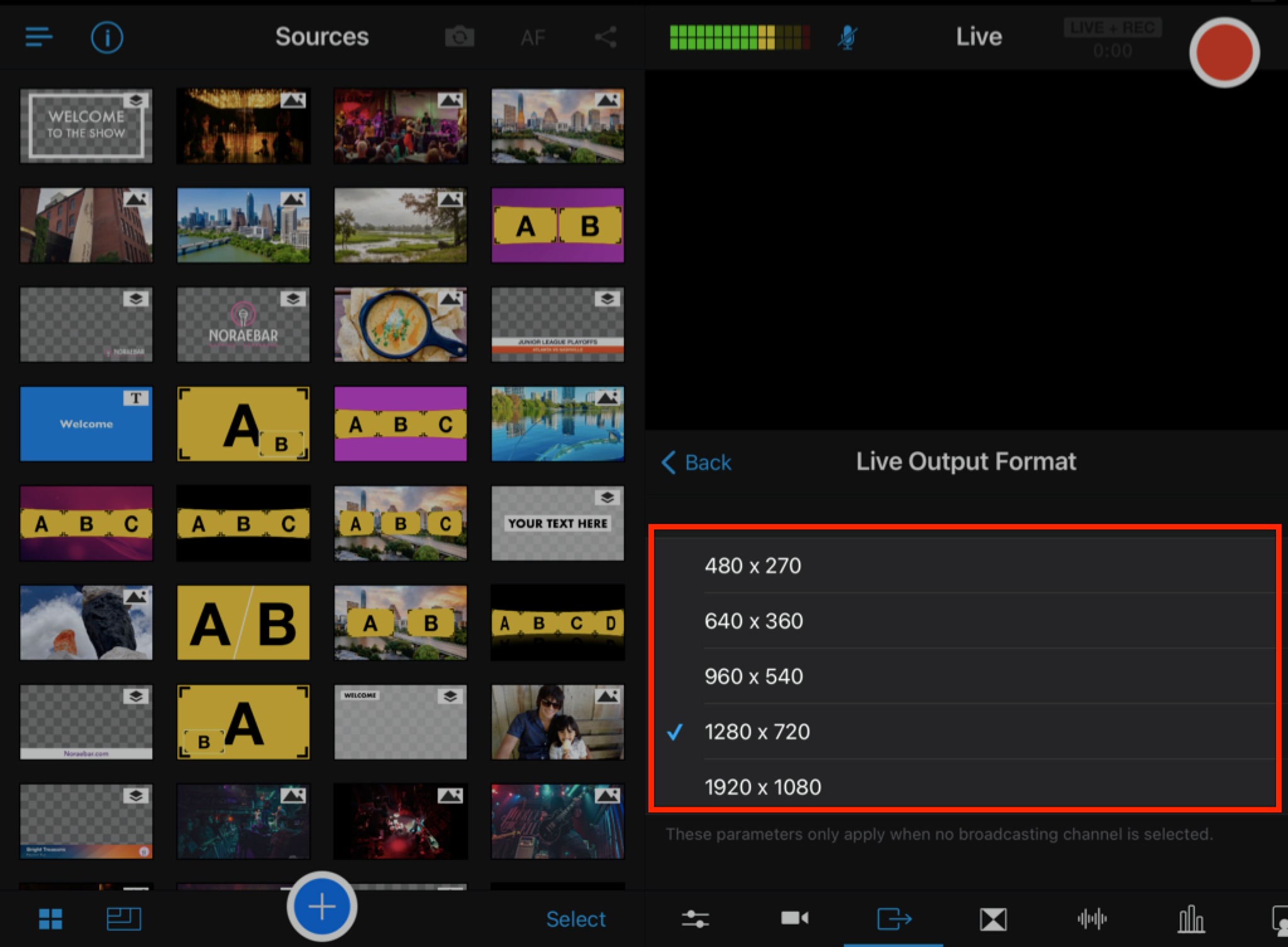 If you are using Zoom, there’s no need to set your video resolution higher than 720p, as that’s the maximum Zoom output. Using a higher resolution will lead to your video service downscaling the picture quality by itself, and this can cause your video to look worse than it otherwise would, and cause your picture to lag.

Some conferencing apps — like Google Meet — have a high upper bound on the resolution they'll use. That means that if you can get great resolution, they'll likely use it. That means that using 1080p is usually worthwhile with Meet.